Happy Summer!  Since my last review, I switched gears and was binge watching TV shows (Netflix) and Netflix originals.  I also have read a ton of unintelligent, brainless books because...well just because.  Now I'm back on the wagon and trying to raise my IQ points again. 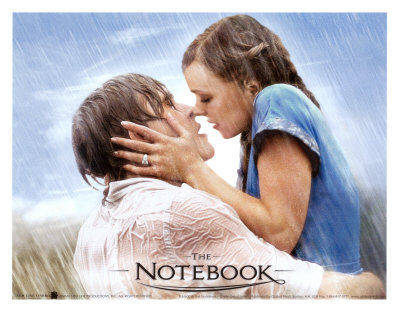 I saw The Notebook when it came to theaters and was immediately sucked into the love story, more so because of the older Noah and Allie.  Yes, I was one of those who just thought Ryan Gosling was just too handsome (clean shaven or hairy)
I have never read a Nicholas Sparks book until now and figured I'd give it a whirl.  The actual story takes place mainly at the point in the film where Allie has returned to see Noah after seeing his picture with the house he renovated for her in the paper.  It's their conversation with flashbacks.  The flashbacks give us a glimpse of what their dating history was like, but it was very simply written.  Not much detail, which I think made it better to be portrayed on film as there was a creative license to take these scenes and expand them.
Like this:

It at least helped me to understand their relationship better and feel more for them as a couple.
and wanted a house just like theirs.

In the book, Allie's parents aren't as involved and the mother definitely doesn't have as strong a presence as she does in the film.  Neither does she ever show or mention a first love to Allie.   That was strictly in the movie.

The film stayed very close to the book, and I think all the actors did a great job of bringing them to life. They seemed to be on point as far as the personalities and behaviors of their character.  The end of the book does leave you a bit in the air as to what happens with Noah and Allie, but it's the films ending that sucker punched me--but in a good way.

There were some moments in the book that got juggled around differently in the movie, but it didn't alter the story or it's tone in anyway.

I decided to read a few other Sparks books, and they are good at best.  Nothing to write home about.  With the Notebook, I think it is the fact that it spans the relationship of a husband and wife over the course of their life.  Very similiar to The Bronze Horseman trilogy, actually.  I have found that these are my favorite love stories.  How often do we see couples that have stayed married (and gone out together) for over 40, 50, 60 years?  It's rare and when those articles do surface on Facebook, I enjoy reading them.

I highly recommend this book, especially if you have seen the film.  Oh and for all you Ryan Gosling fans, this is for you.

Email ThisBlogThis!Share to TwitterShare to FacebookShare to Pinterest
Labels: The Notebook