Hi everyone!  Our discussion begins today, so please comment at any time!

I hate to admit, but I've only begun to begin book 2 in the novel.  Life's been a little crazy so I decided I  would do a part 1 and part 2 review of the book/film.

I think Mario Puzo is a great writer and story teller.  He gives enough details without overwhelming his audience.  He begins his story by introducing us to three different Italian families who are in need of help from "The Godfather".  Usually when you introduce characters at the beginning of a book, they are going to be main characters.  However, these individuals are not and yet that doesn't take away from the story.  their stories set up how we meet the Corleone family and give us insight into the character of Don Corleone.

Puzo also gives us some great characters and is able to quickly establish the kind of men they are efficiently.  He doesn't go on for pages describing someone.  You learn about them through their actions, dialogue, and thoughts.  I'll save my questions and thoughts for the comment section.

Film:  I really enjoyed the film and only watched to where I finished in the book.   I like that the mob life isn't glamorized and how one has to ALWAYS watch their back.  That's a 24/7 job.  Being in the mafia seems too stressful.

It was a little strange at first seeing such a young Al Pacino and James Caan.  James you have so much hair! HAHA!!  I thought everyone in the films was very well cast.  Of course when I think of Marlon Brando, I think this:

Did you know that Brando wanted to make Don Corleone look like a bulldog, so he had a mouthpiece made to achieve the effect of the large jawls.  I'm guessing he thought bulldogs looked touch and wanted The Don to come across as a strong, powerful man just by looking at him.  The make up used was very well done as he was only 48 when the film was made.  He definitely picked up the Godfather's quiet tone yet isn't afraid to show his fierce side when it is appropriate.

Pacino did a terrific job transitioning from the son who didn't want to be a part of the family business to taking over the role of his father.  I particularly liked the moment just before he killed Sollozo and McClusky.  Just because he had killed men in combat didn't mean he wasn't in some fashion nervous to just take out these two men.  The look on his face showed that nervousness.  It only lasted a few seconds, but it was great.  In the book, Michael stays calm the entire time, but I did like Pacino's instinct.
One thing that did bother me was the Italian was not translated and subtitled.  If I hadn't read the book, I wouldn't know what they were talking about.  And seriously that woman didn't scream???

Caan is a great womanizing Sonny.  Sonny is an aggressive man who wants to protect his family, but he doesn't think as clearly as his father or brother.  I wish we were able to see more of him in the film as he is in the book.

Overall, the film is great and I see why it is a classic.  However, as with most really well written books, it doesn't capture all the intimate details, dialogue, or thoughts.

Hey Tom (Robert Duvall)!  Where was your scene where you get kidnapped and your wife is freaking out when you return?  Did I miss that?  Eh, probably...it's been a week since I started the film.  I feel like his character got ripped off--not that he wasn't well written--but you don't get his backstory or why he is important to the family. That's a major bummer because Tom is a wonderful character. 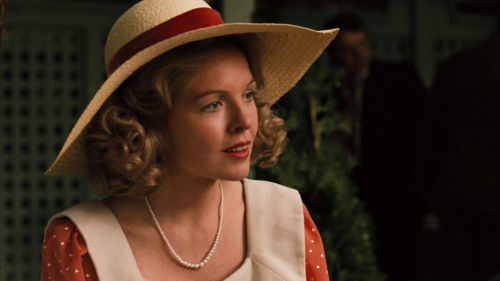 And then there is Kay (Diane Keaton).  Poor sweet Kay who loves Michael so much and doesn't hear from him for three years after he kills Solozzo!  I gotta say, it was hard not to watch her and see her as the book Kay because I've only seen films with her as an older, ballsy gal.  She is lovely though.  I look forward to seeing her more in the film and the book.

Interview with Puzo and discussion questions
Posted by PTSS/LB at 2:50 PM

Email ThisBlogThis!Share to TwitterShare to FacebookShare to Pinterest
Labels: The Godfather