Now that's how you introduce Gatsby: with glorious fireworks
and a dashing smile!

Hi everyone!  I was going to wait until June 1st to get this up and going, however, I only have 9 days until my due date and doubt I'll have much time to get anything done once the baby is here.  Also, with the film still in theaters, I wanted to get a head start for those of you who have been able to read the book and see the movie, as well as those of you who don't know if it's worth seeing in theaters.  Stand back.  Huge opinion coming:

DO NOT PAY ATTENTION TO CRITICS' REVIEWS.  GO SEE THIS FILM!!!


I just finished reading The Great Gatsby for the second time, and honestly, I didn't remember much from my high school reading.  I must say that I am loved it this time around! (If we have any teenage viewers, please tell me how you see this book from your eyes.  I'm 36 with too much experience to remember that far. haha!) Fitzgerald writes such a simple story (only 179 pages) that is completely engaging and written with such prose.  Written in 1925, he had much to draw from as his story takes place in 1922.  As for the films, I watched the 1974 version on netflix the other day and saw the Baz Luhrman adaptation opening day. Um, yeah...it's like comparing a nice, cozy sailboat for a pimped out yacht.
Before I get to the book, let me just comment on the two films.


Sorry Bob, but I could barely watch this trailer and skipped through a lot of your film.  It about put me to sleep.  I remembered watching it in high school but didn't have any strong feelings one way or another for it.  However this time, it was a total snooze-fest.  No, it's not just because this newer film is more vibrant and alive, but it stayed extreeeeeeemely close to the source material and really put the ROAR in "roaring 20s".  That is poignant in my opinion because it gives us more insight into the times, life, and personalities of our characters.

Since I mentioned Luhrman's version staying very close to the source material, let me just give you two examples:

1) the parties.  Holy crap, what were those parties Redford was throwing?  There were so many old people (honestly no offense to the older generations, but let me explain).

In the 20s jazz was really coming alive and the country was living high on the hog and changing socially.  the older generations, much like now, didn't approve of the music, fashion, or other "vulgarity" that was taking place.  When someone throws a party that goes till dawn and the music is throbbing, I don't think you are really going to see many people 60+, unless they are dirty old men who are looking for that young thing.  Then yes, I can believe why they are there.  The older Gatsby parties seemed like such a bore.  Here is how Fitzgerald described Gatsby's parties:

"...a whole pitful of oboes and trombones and saxophones and viols and cornets and piccolos, and low and high drums...the cars from New York are parked five deep in the drive, and already the halls and salons and verandas are gaudy with primary colors, and hair shorn in strange news ways...The bar is in full swing, and floating rounds of cocktails permeate the garden outside, until the air is alive with chatter and laughter...People were not invited--they went there...they conducted themselves according to the rules of behavior associated with an amusement park." (TGG, pg. 40-41) 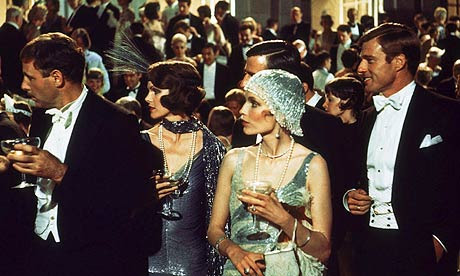 2) minute detail that came straight out of the text:

"As we crossed Blackwell's Island a limousine passed us, driven by a white chauffeur, in which sat three modish negroes, two bucks and a girl." (TGG pg 69)

Cast
I love Robert Redford, but I think Leonardo DiCaprio was the true embodiment of Jay Gatsby.  Redford's character seems flat next to DiCaprio.  For example, when Gatsby is getting ready to see Daisy for the first time, book version Gatsby is a wreck.  I didn't get that from Redford.  I felt DiCaprio had a better sense of the different range of emotions.  Redford also seemed old and mature for Gatsby.  He seemed too in control of his feelings and I didn't get that "dreamer" and great sense of hope from him as Gatsby.  I emotionally connected with Leo and my heart went out to his Gatsby.


I also liked Carey Mulligan's take on Daisy.  Mia is very sweet, but her Daisy seemed more flighty and shallow than Mulligan's.  Mulligan's Daisy was still shallow but you understood why she was the way she was.  I felt more of an emotional/sexual connection with the the newer Daisy and Gatsby.  I wanted it to work out so badly for them even though I knew it wouldn't.  There was enough chemistry for me where I was willing the ending to change. hahaha!!!  (To be perfectly honest, I think Gatsby was too good for Daisy.) 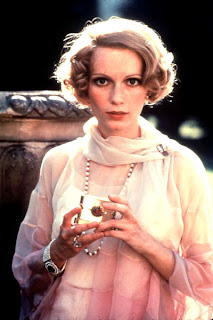 I will discuss the other cast members in the discussion.

As for costumes, set design, and music: gorgeous, beautiful, and surprisingly pleased!

Costumes
Call me picky, but I felt the earlier version felt more 30s than 20s despite finger waves being popular in the 20s.  I also liked the bold colors of the recent version


Meh.  Looks like two people to old to be playing late 20s. 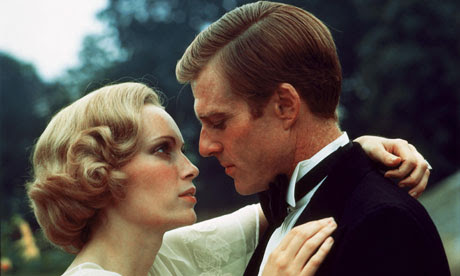 The two "white suits with gray shirt and gold tie"
Again, I am completely biased to costumer Catherine Martin's interpretation. 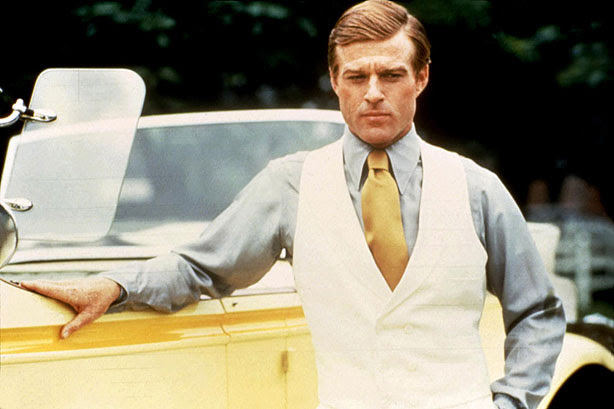 I won't clutter up this review with anymore costume photos, but please check out this video and go see the film!

Music
As for the music, I was surprisingly pleased as I stated because I am NOT a hip hop person.  HOWEVER, the combination of 1920s jazz and hip hop was put together exceptionally well for my taste.  So much so, I downloaded it from itunes and have been listening to it ever since.  And talk about a fantastic group of artists coming together!  Wow!  The songs are strategically placed in the film and give feeling to emotions when words cannot.  I actually can see the exact scene in mind when listening to particular songs and it's very  moving.

Some of my favorite songs from the soundtrack:

Over the Love: Florence & the Machine

I'll reserve further discussion for the comments as I'd love to discuss with you and not just myself.  Please check out our The Great Gatsby article at LIH for additional comments.

Email ThisBlogThis!Share to TwitterShare to FacebookShare to Pinterest
Labels: The Great Gatsby