I went and saw the newest, latest and greatest rendition of King's Carrie last Saturday.

If you are just joining us, we had a book/movie review that you can visit here.

As a newborn, Carrie was using her telekinesis.  I wish we could have seen more of her childhood to really understand why Carrie is treated so brutally by her peers.  Especially the part where as a child, she uses her powers and throws a table out the window.  Anyway...

Chloe Moretz's portrayal of Carrie.  I'm sorry Chloe, but I couldn't nor did believe you as Carrie.  You are talented, but I just didn't believe that you could be bullied by your counterparts in high school.  I know the make up department worked really hard to make you plain and ugly, but you still looked beautiful.  Yes, Sissy Spacek didn't look like book version Carrie either, but she possess a very unique look that allowed her Carrie to really come across as someone stupid teenage girls would pick on.

Another thing that was difficult to associate Chloe as Carrie was her demeanor.  Carrie is shy, completely withdrawn and definitely is scared of her own mother.  Chloe's shyness came and went and there were many times where I really felt she wasn't afraid of her mom.  Well, yes she was but she was too confident in her speech.  What I remember with Spacek's Carrie, was her very vulnerable, delicate nature.  She was really too afraid to stand up to her mom.  She tried, but even then her voice was weak.  You could really tell she was trying, but she was just so beaten down.  When you see her at the prom, just blossom, your heart goes out to her and you see how exciting and wonderful her life could be and you root for her.  That's what makes the incident with the pigs blood so devastating for her.  With Chloe, I didn't feel for her Carrie.  I wasn't rooting for her.  She wasn't fragile enough leading up to dance where she could really try and come out of her shell.  And then there's the blood aftermath.

I felt the acting was too contrived and forced.  Spacek was able to portray a girl who pretty much mentally "checks out".  All she had to do was give us this look and she owned the scene.  She didn't have to look like she was working hard to use her powers and she didn't need to twist her face in anger and destruction.  The checked out look is far more intense, in my opinion.  I would rather deal with a person who you can TELL is angry than someone who has a glazed over look.

Now for Margaret White.  Julianne Moore really did a wonderful job recreating this character.  Nonetheless, there was nothing that needed re-creating.  Piper Laurie nailed it with the book Mrs. White.  She was physically intimidating, with her strong arms and alarming presence, but she was also very vocal and staunch in her religious beliefs.  Moore's White was too soft in that approach.  yes, she had her fine moments of acting like a religious crackhead, but I felt there were too  many moments where she let down her guard and showed how vulnerable she was.  I also didn't understand why they added that she is a cutter.  All in all, Julianne did put in a good performance, but it still wasn't enough.  She didn't even get the line, "They're all going to laugh at you!" with the conviction I felt in the book.

Piper, you were greatly missed. 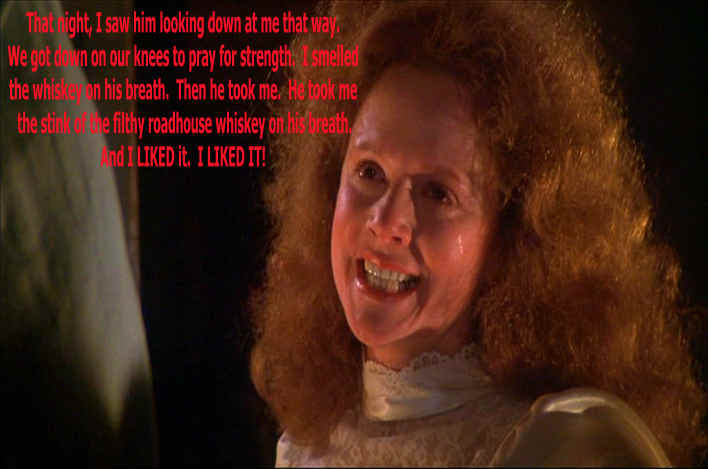 I also was disappointed in how Margaret dies.  With the film staying more true to the book, why couldn't they incorporate her death?  the knife weilding, Christ on a cross repeat death was ho hum.  I think Margarets death by having Carrie painfully slowing her heart could be portrayed very well on film.  That is far scarier, but it's not my film to direct.

I felt the final scenes were headed in the right direction.  I liked how it showed her destroying the gym and a bit of the town, but I do wish we could have stayed a little longer on how she was truly destroying it.  Also, I felt the death scenes were a bit over the top.  I don't think gore was needed.  Again, with the 1976 version, crazy eyed Carrie is so intense that you didn't need gore to scare you or get you going.  And maybe I am completely wrong here (which is usually the case), but hasn't Carrie harnessed her powers at this point?  I thought she had so I couldn't figure out why Chloe/Carrie was focusing and trying so hard with the car.  Her expressions were working overtime which I found distracting.  Again, that's my own personal complaint and shouldn't deter anyone else's viewing pleasure.

Finally, the reaction by the adults at the prom scene bother the crap out of me.  The minute that pigs blood fell, I don't know of any adult who would have just stood there looking like a stupid fool.  There was so much time wasted without one mature adult or high school kid, getting up on stage and doing something about that awful prank.  They all acted like a bunch of bafoons in a day and age where bullying is so rampant and society is trying to stop it.  No one even tried to help the girl for crying out loud!  that was the most annoying part of the whole damn film.

Portia Doubleday, who played Chris Hargensen, was FANTASTIC!  She was a true present day b-yotch and I haaaaaaaaated her!  I got more from her Chris and really felt why she was going after Carrie.  I felt she wasn't a spoiled girl who didn't get her way, but a youth of today who feels completely entitled to everything and everyone; punishment doesn't exist and if you dare try to discipline her, she's going to make your life a nightmare.  I admit that although I didn't need the gore in the film, her death was pretty freakin' awesome.  Her character was the most memorable for me.

Wow.  That's it?  I guess so.  I wish we could merge the acting of the '76 with the additional scenes of '13.  In the end though, "Don't mess with a classic, Hollywood!"  They are RARELY any better than the original.  Also a note to Hollyweird: If you want to reimagine something and use the book as your source, go by the book.  I'm pretty sure there are some amazing screenwriters out there who could incorporate Carrie's story through the voice of the townspeople.  Now that's the Carrie I would pay to see.

Which version do you prefer?