Rating: 6--yes a 6 because this story is HOLY-FREAKIN'-AMAZINGLY-INCREDIBLE! But that's our humble opinion.

Oh. My. Gosh.  Oh. My. GOSH! OH MY GOSH!!!  I am currently re-reading this amazing biography because there was so much information and incredible story telling, I couldn't process it all.  I read it in three days and cannot suggest this book enough.  The life story of Louis Zamperini is not just impressive, but mind blowing and inspirational.  I love history, especially that of WWII, so to incorporate his story with vast research on POW camps, my brain got an incredible workout.


Honestly I don't know where to begin because there are so many moments that need discussing.  Laura Hillenbrand and her team did extensive research that took 7 years and did a beautiful job keeping me engaged and riveted on Louis's story.  Louis is just one of many inspiring men from that era, and his story is mind-blowing.  I cannot even BEGIN to comprehend his experience as a POW, particularly one for 4 years!  What these men endured...my gosh!  The will to live is a powerful thing.

I became so attached to Louis and all the members of The Super Man.  Every time I thought, "This is it!" they pulled through.  My heart ached for them...oh and Gaga, the little duck!  You were such a minor character, but you were my favorite.  You brought hope and I really hope "Sh#thead" (that's how he was nicknamed) got what he deserved with The Man Upstairs for what he did to you.
This book will be joining my selective personal library and will be filled with "dog ears" and notes.

Truly this book is a great example of determination, perseverance, and the will to survive.  Not everyone can do it and not everyone does, but it is possible.  Thanks to all the men and women who have had to endure such atrocities whether it be through war or in your own home.  You help us realize we can rise above such evil.

Today I went with the hubs and friends to see the film.  I thought it was very well done.  Considering the amount of backstory and history in the life of Louie, I think all the script writers did a thoughtful, emotional, and historical account.  Would you believe that Joel and Ethan Coen were part of the screenplay team?  They joined Richard LaGravenese and William Nicholson.  I was pleasantly surprised considering their usual string of films--The Coen brothers that is.  Jolie gets a thumbs up for bringing this incredible story to the screen and I think her cast was excellent.

Jack O'Connell played a very convincing Zampirini and wow if he didn't resemble the real life hero!  Phil, (Domhnall Gleeson) and Mac (Finn Wittrock--yes of famed American Horror Story, Dandy!) broke my heart during their days at sea.  Their skeletol frames and desperation to survive were beautiful.  Jolie did try to give us a glimpse as to how they survived the days with feeding on birds, fish, and shark as well as their conversations about recipes and football games.  Unfortunately, if if you didn't read the book, you wouldn't know that it was Phil and Zampirini's daily conversations of mundane things and sheer positive attitude that ultimately led to their survival.  Mac was very beaten down from the beginning of the crash and couldn't pull out of it. 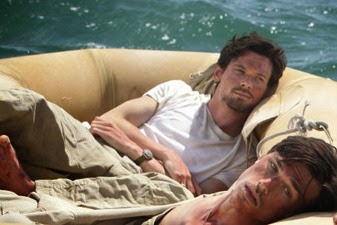 The only things I found problematic aren't really that bad at all nor do they take away from the film.  Again, films cannot capture every nuance, tone, glance, dialogue from the book.  I felt that way with Watanabe or "The Bird".  Played by Takamasa Ishihara, "The Bird" definitely showed a control freak of epic proportions.  However...he didn't seem nearly as nuts or intense as he came across on the pages. He had such hatred for Louie, he had him do push ups in feces.  Yes, much was not shown in the film.   And yes, I wanted to see my little Gaga, but it wouldn't have served any story line.

I also missed getting to know the crew of Super Man.  We got a brief glimpse of their friendship before all went to hell, but again, it wasn't about them.  SAme with getting to know Zamp's family more and seeing what was going on in their lives during his years in the POW camps.  But again, for a film, you have to decide which POV you are going to focus on and it was through the eyes of Louie.

Lastly, I wish we could have seen more of what POW life was like.  It's a fine line though because you don't want to leave feeling completely disturbed since this is a story about redemption and unwavering spirit.  What Jolie and her team did give us was heart breaking and made me appreciate what all our men and women have endured and still endure during battle.  I have talked with many friends whose father's were POWs and it is sickening what a human will do to another.

I wish there had been time to see his life post war: dealing with severe PTSD, reuniting with Phil, married life and how he was able to forgive his captors.  Jolie did give us some snap shots of his life and what happened to him at the end of the film, but for this reader, I wanted more!!!  It's important to see what happened when the men came home, especially POWs.  Oh well.

I highly recommend this film and encourage reading the book as well.  I plan on reading it again as soon as I am done with my current book.  His life truly is a great example, amongst others, of perseverance and optimism during extreme conditions and to never ever lost hope.  It also shows how forgiveness can heal even when it seems like the last thing one wants to do.
Posted by PTSS/LB at 1:07 PM

Email ThisBlogThis!Share to TwitterShare to FacebookShare to Pinterest
Labels: Unbroken