In the Heart of the Sea Book and Movie Review 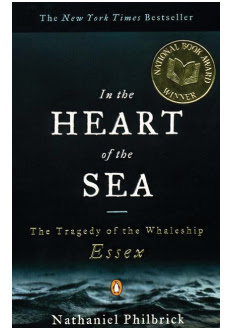 "The ordeal of the whale ship Essex was an event as mythic in the nineteenth century...this epic story inspired the climactic scene in Herman Melville's 'Moby-Dick'.  In 1819, the Essex was rammed and sunk by an enraged sperm whale.  It's twenty-man crew, fearing cannibals on the islands to the west, decided instead to sail their three tiny boats for the distant South American coast.  They would eventually travel over 4,500 miles.   The next three months tested just how far humans could go in their battle against the sea, as one by one, they succumbed to hunger, thirst, disease, and fear."--jacket cover

I thought this was a great story and an even greater history.  I admit I have never read Moby-Dick (on my list!), so it was very interesting to read the real life events of the Essex crew and how they inspired Melville's novel.  The battle with the sperm whale was relatively short.  It wasn't a whale who kept coming at them week after week.  However the damage it causes leads to pretty catastrophic events.  The great irony was in the fact that these men did have to resort to cannibalism of their own crew members despite their fear of cannibals on an island that could have actually saved them.

The Captain, Captain George Pollard, Jr., was a bright man, but when it came to leadership, he tended to give in to his first mate, Owen Chase, and second mate, Matthew Joy.  The men lacked knowledge of the Pacific, and while there were many rumors of cannibalism in the Marquesas (Society Islands), there was a lot of information to the contrary that they could have easily obtained.  Instead of pulling rank and carrying out his proposal to sail for he Society Islands, Pollard went with Chase and Joy's plan: sailing directly for the coast of South America.  It seemed to be a 50/50 situation.  I honestly have no clue what I would have done.  However, as seaman, I would have thought they would have truly studied up the area they were sailing.

The deprivation these men go through is unimaginable.  They started suffering from hypernatremia, in which their is an excessive amount of sodium in the body that brings on convulsions.  They did find some sea turtles and other fish and birds to eat, but it was never enough.  With their bodies in such bad condition, most food didn't stay down long.  The hardest part was the men decided on who they would kill next for food. of the twenty-man crew, only eight survive.

It didn't initially start that way.  After men died, the crew would eat them.  It was not taken lightly and at first it was extremely difficult to do.  They it came to a point where they were drawing sticks to see who would be killed to save the crew.

The aftermath of their lives once they were rescued and returned home was very interesting.  I would have thought Pollard, who started out weak, would have succumbed to his experience and led a very sad life.  Instead, he seemed to do extremely well, all these considering, and was beloved by the town.  Chase, who presented himself as much stronger, was the one who ended up having massive headaches and going insane.

Philbrick did great research for his story and he provides ample additional reading material.  I cannot imagine the horror these men endured.  You cannot judge them for the decisions they made unless you walked in their shoes.  Shoes I hope to never fill.

I am looking forward to the film and how each character is portrayed.  I hope they truly capture the misery and devastation of these men.  That sounds harsh, but it's important to portray these true life events as honestly as possible to truly appreciate their history.

I am a Ron Howard fan and with such a great cast, I have high hopes.

Email ThisBlogThis!Share to TwitterShare to FacebookShare to Pinterest
Labels: In the Heart of the Sea