Today I thought I would do a mini-spot light on Stephen King.  I have read many of his books and seen several of the film adaptations.  Currently, our book for this month is Carrie.  So far, I am enjoying it.
If you would like to read our review of Stephen King films please visit Stephen King: Master of Horror.

I love Stephen King.  I don't like some of his stories, but it doesn't make me less of a fan.  I think he has a great, vivid imagination and knows just the right mixture of reality and horror to freak me out.  Below I have included several of the books/short stories I've read.  Click on the links for a synopsis. 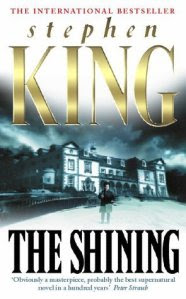 The Shining is one of my all time favorites, but I wonder if that's because I saw the film first and can now only visualize Jack Nicholson as "Jack".  Stanley Kubrick directed and changed lots of things from the story.  The maze animals don't come to life and croquet is not involved.  It's been a while since I read it, but I would definitely recommend it.  I give it a 4. Night Shift has some terrific short stories by King.  This was his first published work.  I know that several of these stories have been turned into short films and I don't think many of them do the stories justice.  At all!  But many of them were done in the 80s and we didn't have the special effects we do now.  Maybe with the right director, actors, etc...they could be great.  Either way, fantastic book.  One I keep on my bookshelf and great to use as ghost stories at a campout.  A solid 5. 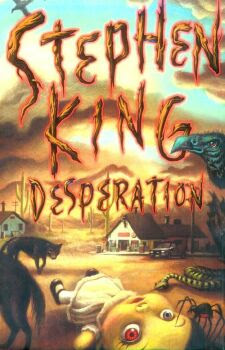 I really liked Desperation and the main character scared the heebeejeebees out of me!  A lot going on, but I found it very interesting.  The film stunk, IMO.  It didn't really capture the "creepy, get the heck out of dodge" feel for me that the book DID.  I give it a 4.

The first non-horror story by King that I read.  I loved it.  Bag of Bones has murder, mystery, and love.  I was shocked to find that King, Mr. Horror himself, could tug on my heart strings and make me get choked up.  I saw the recent mini-series and it was ok.  it was nice to see some things played out, but the emotions in the book was not very well carried over.  I give it a 4.

Hearts in Atlantis has novellas and short stories that link several characters together.  I enjoyed the stories.  I would recommend it and give it a 3.5 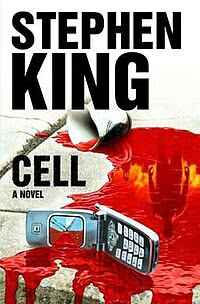 Cell really makes you think about how technology could ruin the world.  Gotta love the flip phone on the cover. hahahahaha!!!  I very much enjoyed it and give it a 4. 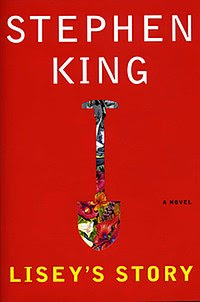 Lisey's Story was.....Ok, I'm going to admit that this one confused the crap out of me.  I can't even summarize it appropriately because it was weird and confusing.  Still creepy, but I would only give it a 2.  Anyone else read this? 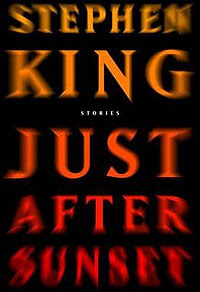 Love this!  JAS has one of my favorite stories in this collection is Stationary Bike, N., The Gingerbread Girl and Harvey's Dream.  In Stationary Bike, a man is told he needs to bring down his cholesterol level or he'll end up dead.  he gets a bike and gets a bit obsessed with lowering the levels.  He starts losing his mind and starts talking to his LIPID team inside his head while he's riding.  it gets to the point where the 'team' is willing to take him out if he doesn't cool it.  He does and realizes he can enjoy some good food in this world without being obsessive.  It reads better than it sounds, I promise!  I liked it because I think it does happen where we become obsessed with something and sometimes there is a voice in our head that begins to consume us to only focus on that one thing.  Not in schizo-way, but that voice that tells you, "No, no, you can't stop!"

N. just messes with your mind!!!  it makes you doubt what you see and how you think.  I can't give it any justice, so I'll just let you read the summary on your own.  It is creepy and I can't imagine how crazy it would be to start doubting if something you saw was real or fantasy.

The Gingerbread Girl is another one of those stories that deals with mental and emotional struggles.  the main character has become a crazy runner.  She started running because it was her way of dealing with the loss of her baby girl to SIDs.  Anyhow, it starts hurting her marriage, so to take some emotional time apart, she goes to her father's abandoned house along the east coast.  it's a very secluded area and she's really the only one in the area.  There is another house along the way and she is told that the guy brings his "neices" there all the time.  She stumbles upon his house while running and finds a dead blonde in the trunk of the car.   So yeah, the guy is a serial killer and she gets trapped in his house with him.  It's all about her escape and it is intense!!!

Harvey's Dream made me think twice about telling my dreams!  This is one story where you think, "what if this really could happen???"

I give this book a solid 4! 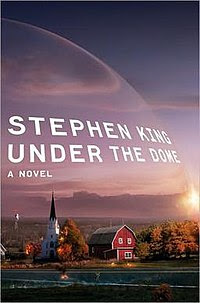 I give UD a 4.5  I thought the concept was great and there was carnage from the start.  I felt the aliens or whatever they are were less than exciting, howeverrrrr, a great story and I liked watching the town divide and see who was going to come out on top and how that was going to be accomplished.

There are still so many SK books I want to read and eventually I will get to them.  I will also try to brush up on these books so I can give you a more satisfactory review of each. :)