Hi everyone!  Please start commenting at anytime prior to and after our discussion time. :)
Trying something new where I am going to post my review here and then at our discussion we can share our thoughts and questions together.


Ok, so let's back up to the book.  Carrie is considered YA (Young Adult) and looking at the story, I can see why.  Plus it is a very short story.  There really is so much discuss so I look forward to that conversation with all of you.  :)

I think what lacked in the film was the intensity that King writes.  Also, there are POVs and personal thoughts that added so much to the story.  The book is written in flashback form.  We go in and out of Carrie's life and death with journal entries from Sue Snell, articles on telekinesis, and witness accounts. It's very well done in my opinion.  The film does a suitable job giving us some back history to Carrie, but not enough.  In the book, we see events in her childhood and given more of her experiences in high school that help you better understand why she is such an outcast and bullied person.  In the film, you get none of that.  You don't know why all the girls hate Carrie and make fun of her...they just do.

Something that bothered me, and I have commented on this elsewhere, is the distinct difference in the appearance of Carrie in the book and film.  In the film, Carrie is a thin, plain but pretty girl.  In the book she is chubby with major acne.  I don't know why they didn't stay true to the book.  And looking at the new film with Chloe Moretz, she still doesn't look like book Carrie.  Part of the reason she is picked on relentlessly is not just her extreme behavior, but her looks.

Things I really liked about the book:

1) Stella Horan's (neighbor) account of Carrie around age 3.  You learn about her crazy wack-a-doodle-relgious nut mother.  It also gives us the first glimpse of her telekinetic powers.  She throws a huge, solid dining room table out the window and the house is bombarded by hale and rocks.  And it's only their house, no one else's in the neighborhood.  I can't summarize it and give it justice.  it's a great flashback.  They tried to incorporate the rocks into the film, but they just couldn't afford it and get it right.

2) Carrie.  You really get to experience her sadness, lonliness, longing to be normal, and absolute murderous anger.  Bullying online, at school, work, etc...has become such an epidemic and will be addressed in our discussion.  I think of all those who are bullied or have been bullied and the thoughts that go through their heads regarding those who torment them.

3) Margaret White's death.  it's not nearly dramatic as in the film (which is pretty cool by the way) but I thought it was great.  Slow and knowing.  In the book Margaret is spouting biblical crap at her daughter while Carrie is telling her mom that she is slowing her (Margaret) heart more and more until it finally just stops.  In the film she gets attacked by knifes, carrot slicers and other utensils and ends up pinned to the door.  She ends up just like the scary Jesus on the Cross figurine in Carrie's "closet".  yeah much more drastic, but I liked the book version. 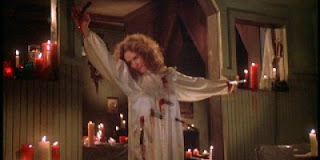 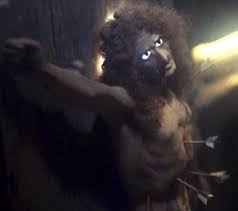 4) Carrie's destruction of the town, not just the high school.  I also thought it was terrific how she was able to get into the minds of the townsfolk.  Most who had never met her, knew it was her that was doing all the destroying and chaos.  From what I have gathered, the 2013 version will stay closer to the book in this aspect. 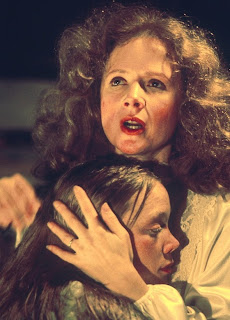 Pardon my s-bombs, but it's true.  That woman is a freak show and I know there are many like her out in this world.  Carrie was loosely based on a student of King's.  Her mom was a total religious nut case.  The girl ended up committing suicide later in life.  Anyhoozles, in the book King gives us another great physical description where Mrs. Straightjacket has strong, powerful arms and shoulders because she lifts heavy equipment at the laundry where she works.  Piper Laurie seemed to fit the crazed, powerful mom bit.  I'm holding out for Julianne Moore.  I think she is a terrific actress and will "nail it", but again why can't we stay closer to book descriptions when they are so apparent!!!

6) And lastly, Carrie's last moments with Sue Snell.  I really liked Sue.  She turned out to be a great person and I like that after Carrie realizes what she's done and how she has killed her mom, she has someone with her in her final moments.  Poor girl needed a friggin' break!  Carrie got into Sue's mind and showed her everything "they" had ever done to her.  It's an incredible moment for Sue and once Carrie has died in her arms, she becomes so violently ill and starts taking off running.

There is only one thing I really like about the film:

Sissy Spacek.  She did a great job.  A fantastic job as Carrie!  And wow, she really creeped me out in the prom scene.  With her fine features, wide eyes, red blood coating her and her murderous glare, I can't imagine a scarier Carrie. 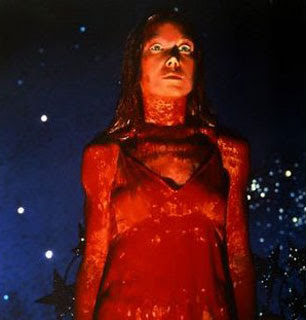 Here is Chloe as Carrie.  Not as scary, but I'm hoping to be wrong.

I'm only looking at a still, not a final product.

I also thought the gym Prom scene before all hell breaks loose was a beautiful build up.  Carrie arrives with Tommy and he treats her so well.  She looks beautiful and you can tell she is letting her guard down a bit at a time and really enjoying herself.  I think this scene was crucial and played out beautifully.  It allows Carrie to draw even further into herself and mentally snap when she gets the pig blood.

p.s. Sue Snell does NOT show up at the prom in the book.

If you have not seen the 1976 version, go rent it.  It's still a great film even though I for one like the book better.  It's just creepier.  I don't know why we have to have another remake of a classic, but I have high hopes for the 2013 film.  I'm sure I have forgotten something, but that's what our discussion is for.  :)

I leave you with the teaser trailer for this spring's remake:

Email ThisBlogThis!Share to TwitterShare to FacebookShare to Pinterest
Labels: Carrie